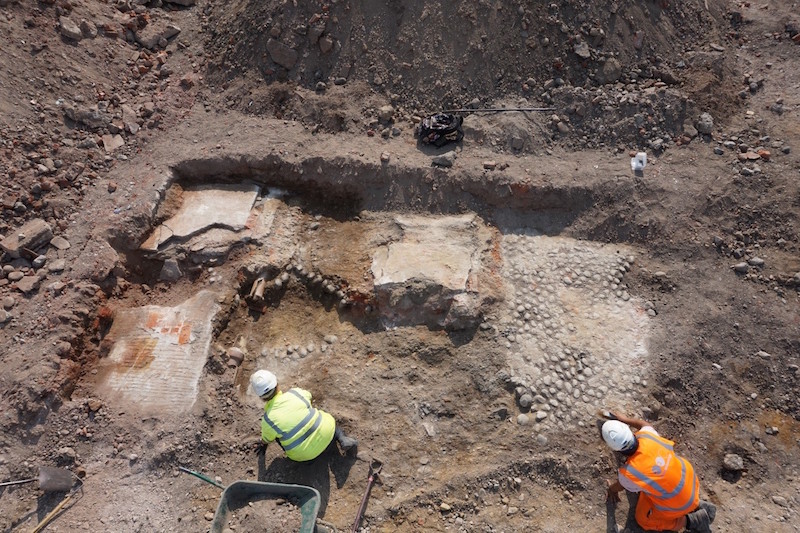 Freshly unearthed history was on display in Ipswich as archaeologists talked about their latest finds.

The discoveries in the Lower Brook Street development visible from Turrett Lane were found in the middle of the assumed location of the historic St Peter’s Priory, later becoming Cardinal Thomas Wolsey’s College. 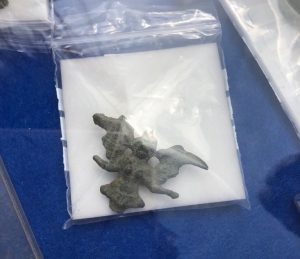 Archaeologists from Oxford Archaeology East were on site on Friday talking about the artefacts many of which are thought to be from Anglo-Saxon times.

A spokesperson at the site for Oxford Archaeology East said: “One tank in particular contained a large number of oyster shells and the tank itself may have been used for preserving them or perhaps for keeping them in water to keep them fresh.”

A copper alloy belt brace was found on the site thought to originate from Europe and brought to Ipswich by boat.

A tiny lead rune was also found which a detailed inscription thought to be a curse or a charm that is currently being translated by experts in Anglo Saxon history.

Paul West, county councillor for Ipswich said: “The county council’s Archaeological Services takes a proud role in such projects to ensure that the remains and finds are protected and recorded. New developments and construction in Ipswich are important for the town’s future but we must ensure that we safeguard our history at the same time.”

Plans have been approved for the development, on  the former offices of the EADT and Ipswich Star for a retirement home development for McCarthy and Stone, consisting of 51 apartments, 11 houses and additional facilities for future residents.

Churchmanor Estates are the company responsible for the development and the archaeological  works. Matt Cloke, Development Director, commented: “We are excited to be regenerating this important site in Ipswich, which forms a key link between the town centre and the Waterfront.

“We knew from the outset of the project the site had important historical connections, and as part of the site preparation prior to the construction of the new retirement living development by McCarthy & Stone, have invested in excess of £350,000 and worked carefully with our consultants and contractors to ensure the site’s heritage has been properly recorded and preserved.”

He added: “At the same time, we’ve also ensured that the remains of the industrial uses from more recent times have been fully removed, allowing the site to be returned to residential use once again, and starting the next chapter in its history.

“We are pleased that the work has contributed to the knowledge of Saxon life in Ipswich, and are very happy to have been able to help bring this to a wider audience through the talks by Oxford Archaeology East.”